On October 11th, which conveniently happened to be on National Coming Out Day, all Helix staff gathered together in the Excel building for an LGBT+ youth sensitivity training in order to bring awareness to the issues permeating campus life regarding LGBT students today.

The two-hour presentation was led by Mick Rabin, a member of the GLSEN Board and the San Diego Unified School District as a Project Resource teacher for 25 years.

The necessity of using students’ correct pronouns and providing support to students of all sexualities and gender identities was heavily stressed throughout the meeting, and it also provided a space for teachers and staff to ask questions that they might not have otherwise gotten the answer to, such as, “How do I address a student if I am unsure of their gender and don’t want to assume?”

The executive director of Helix, Kevin Osborn, also wanted to have input from LGBT students who are directly impacted by a lack of support, bullying, or stigma surrounding sexual orientation and gender identity. He reached out to Vicki Hoffman, the official supervisor of the Gender and Sexuality Awareness (GSA) club, hoping for some of the club’s members to speak at the meeting about their experiences at Helix and the importance of using correct pronouns.

“I think it added everything, because we’re all teachers, we’re teachers of students,” says Hoffman, “and so to actually see the real-life thing in front of us speaking about the issues and concerns that they have is more powerful than any speaker that comes and talks about the issues out in the world.” 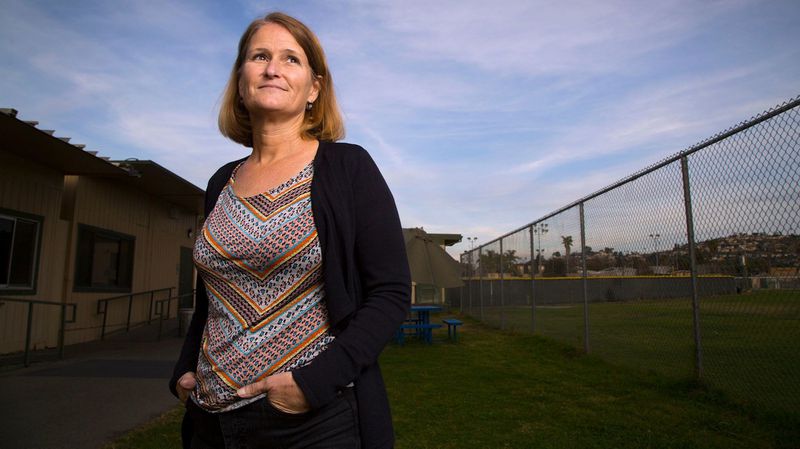 Alyx Shamburger and I both volunteered to speak at the beginning of the meeting for roughly five minutes each in order to properly educate the Helix staff on the correct way to address trans students, keeping communication with your students in regards to how they want to be identified in certain situations, and why correct pronouns are needed for the well-being of trans students.

“Personally, I was…brought to tears listening to [Avery and Alyx] talk, because it makes me realize how difficult it is, honestly, especially at this age,” Hoffman continues, “Even though you might not think that…I can look back and just try to imagine myself going through that at age 16, 17, so it is very important.”

Near the end of the training, I was lucky enough to be allowed to participate in an exercise with the other Helix staff. We all sat down in two long rows of chairs facing each other and had to answer certain questions with one another. Some of these questions were, “How did your upbringing influence your perception of race?”, “How did your upbringing define what it means to be a ‘man’ or a ‘woman’ for you?”, or “Was your exposure to information or opinions about the LGBT+ community positive, neutral, or negative? How does this influence you as an educator?”

“I think, to create a safe learning environment, that educators should respect their students’ pronouns, because otherwise, how can you learn if you’re not able to be yourself?” says Natalie Mitchell, a regular attendee of GSA, “There’s always more that can be done, but I think Helix is doing pretty good.”

As of now, all Helix staff are being left to adjust their curriculum accordingly in order to discuss LGBT+ issues in class and better support students of varying sexual orientations and gender identities. Meanwhile, I left the training with a renewed sense of pride for the open-mindedness of Helix Charter High School.